As it turns out, Child Passenger Safety is a pretty narrow topic for a blog.  It’s hard to be creative and come up with a new topic every day that isn’t a rehash of an old one.  So, we occasionally mix in parenting issues, other child related products (especially if someone sends us one for review!) and sometimes just whatever is on our mind.  I intended to write a quick overview of the Samsung X460-44G for a notebook forum, but it turned into a longer review so I figured I might as well make it a blog.  Everyone reading has a computer and many probably have laptops, so maybe it will help someone.  It’s a hair more technical than the last one, so apologies in advance to everyone looking for today’s CPS fix.

I know.  I just bought a Samsung NC10 netbook.  It didn’t quite do the trick.  So, I pulled the trigger on a Samsung X460 44G shortly after I discovered a rebate deal earlier this week.  It was a close call vs. the Lenovo U330 that I had been considering for a while.  Both had similar features for nearly the same price.  Both weigh about the same.  I went with the Samsung for a few reasons.  Good overall reviews, included recovery DVDs, Vista Business and respectable battery life reports.

Mine is the X460-44G with the P7350 processor.  I’ve installed my Intel X-25M SSD 80GB hard drive and also a fresh copy of Vista, so no bloat ware to slow things down.  The drive swap was relatively easy.  The drive bay has its own panel secured with two small screws.  It’s a standard 2.5″ SATA drive, but they used a ribbon adapter, rather than straightforward plug-in sockets.  I had to gently untape and remove the adapter and carefully attach it to the new drive, but it wasn’t too difficult.  I note that the hard drive bay was nicely damped with a rubber insulation and bumpers, presumably for both shock and noise reduction.

Some background reviews I compiled from a thread at Notebook Review and elsewhere:

My 44G version differs mainly from the 44P in the reviews by virtue of slightly lower power CPU from the same processor family.  It’s also cheaper.  At US $880 delivered, it’s pretty impressive for its 4 pound weight and thin profile.

I’m sorry I can’t compare the X460 to its competition.  All I have is a Samsung NC10 netbook and a 5-year old HP ZD7000 beast of a notebook.  Some pros and cons from just a couple days of use-

For me, the vertical viewing angles are the only real annoyance.  If you have a light background or something like a browser or Word document, you don’t notice it.  If you have a darker background in a dark room, it is distracting, especially at the top brightness settings.  I’m pretty much set on keeping it, but I thought the same about the NC10 when I got it.  The short pauses while browsing on the NC10 were a nuisance and the lack of a suitable palm rest and the sharp edges made typing uncomfortable as I had more time with it.  I also couldn’t get the response of the scrolling feature on the touchpad to be quite right on the NC10.  In addition, the touchpad surface blended in too well with the palm rest area, so it was hard to find the scroll area quickly by touch.  The X460 uses the same brand of touchpad, but it feels right and works as I expect.  Plus, none of the annoying pauses where I cant click or scroll, so far. 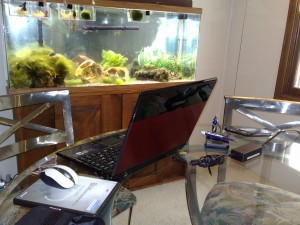 The beauty of the X460 is the light weight and thin profile.  You even get discrete graphics (if only entry level) and HDMI connectivity for under $900 after rebate.  Other models were too heavy, too bulky or too expensive for me.  I would have loved to have a Sony Vaio Z 590, Toshiba R600, Lenovo X301, Asus U6V or similar 12-13” ultraportable.  Any of those I liked were much more expensive, in some cases by more than $1000.  The Dell XPS 1340 at Costco looked great overall and the price was right, but it tipped the scales at 5 pounds.  Many other 13.3” models were also no thinner or lighter than this one, like the Lenovo U330 that was my next choice.  In addition, some others had integrated graphics and slower DDR2 main and video memory, but had no better battery life and were no less expensive.  The X460 isn’t without its annoyances, but so far they seem to be pretty well documented in the various reviews and I don’t think any are show stoppers for me.  I’ll try some light gaming (Warhammer Online) and DVD playback soon.  I will also test portability on a plane trip next week.  If there are no surprises during my 14 day return policy, it is a keeper.  Really!  Unless I find a better deal, of course…