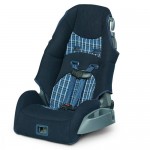 I’ve decided to document how various combination (harness/booster) seats fit my 4-year-old, 41 lb, 43″ tall son in booster mode.  He’s at the size where most parents would be switching from the 5-pt harness to the vehicle’s lap/shoulder belt in booster mode if they had a combination seat with a 40 lb limit on the harness.  In each case I’ll use the same seating position in my van – driver’s side captain’s chair in a 2005 Ford Freestar. 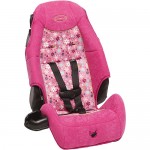 The IIHS booster study compared the fit of various boosters using the 6-year-old Hybrid lll dummy who weighs 51.6 lbs (23.41 kg) and has a standing height of almost 45″.  I thought it would be even better to show belt fit on a child who was just over the 40 lb weight limit for the 5-pt harness.  I’ve decided to focus exclusively on combination seats because of their popularity.

This week we’re back to Dorel (Cosco, Safety 1st, Eddie Bauer) and we’ll be looking at the

Cosco High Back Booster with harness.  There have been many varia 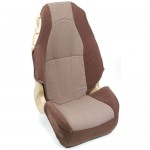 tions of this seat sold over the last 10 years and it’s still widely available today in places like Walmart, Target and BRU.  Recently, I’ve noticed that these seats are being sold in clear plastic, zippered bags instead of traditional cardboard boxes.  There have been many different model names over the years.  Often this seat was sold without the harness (as just a booster) with names like Complete Voyager and Vista.   I think it’s safe to assume that there are millions of these seats being used by children all over America today.  Let’s see how this model stacks up as a booster….

Cosco High Back Booster.  This particular model had the shoulder belt guides sewn onto the side of the cover.  The newer models have the shoulder belt guides molded into the sides of the shell.  I started off with the shoulder belt threaded though the middle guide and then decided that it was too low on his shoulder so I moved it up to the top guide.  This positioned the shoulder belt more squarely over his collar bone but if he turned his head – he wound up with the belt touching his face.  I can only imagine that this would get pretty annoying, pretty quickly.  To be fair, this is probably an issue with most highback boosters that have a one-piece shell.

The Good:  Hmmm….  not much to brag about here.  The shoulder belt when placed in the top guide position did place the belt in the correct area between the neck and the shoulder.

The Bad:  The lap belt is positioned too high.  It’s not touching the tops of his thighs where it should be.  This means an increased risk of injury in a crash.  The shoulder belt, even when positioned correctly with the guide, sticks out and would rub against his chin every time he turned his head.

This is an antiquated booster design and it shows.  This seat seems more suited to 1995 than 2005 when it was made.  I’m not sure if the newer models are any better.  This is a seat that I frequently see used by CPS distribution programs (because it’s relatively inexpensive) but I don’t recommend it.  As a forward-facing harnessed seat it’s not terrible but as a booster – I give it two thumbs down. 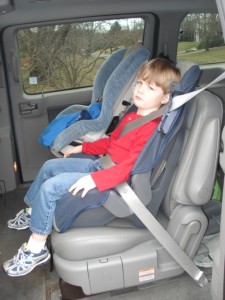 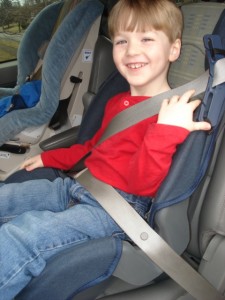 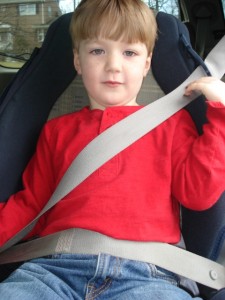 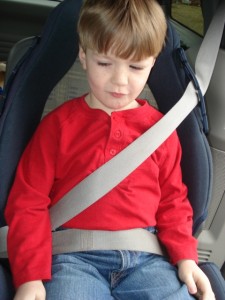 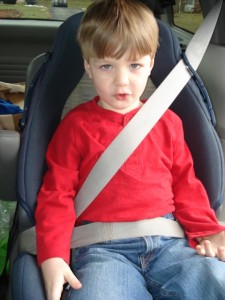 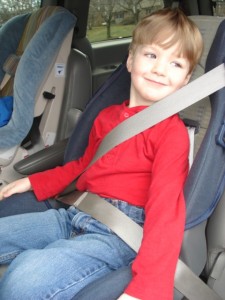